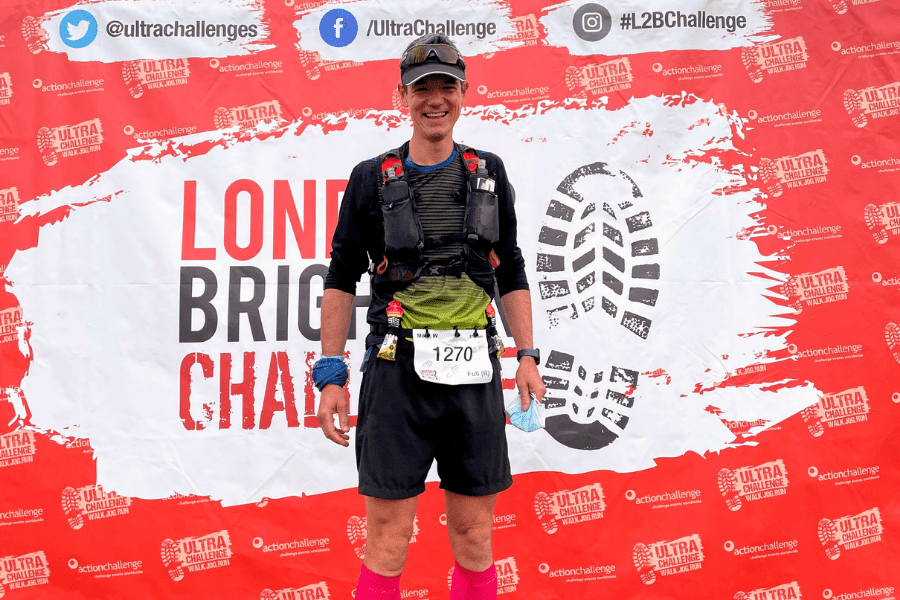 I was down to run the Isle of Wight Challenge, but sadly due to Covid this was postponed and clashed with Race to the Stones that I’d already signed up to in July, so I decided to swap it to the London to Brighton Ultra.  It would be my first 100km race, and by far the furthest I’d ever have run.

My logic for choosing this one was, firstly, I’d already trained for IOW, and wanted to get an ultra in before RTTS. Secondly, I was running home so psychologically it should be easier. Finally, it’s North to South so surely it must be downhill right?

The route runs from Richmond, along the banks of the Thames, over the North Downs, through Surrey and Sussex countryside to the halfway point at Turners Hill.  Thereafter it heads South, to Plumpton and over the South Downs, finishing at Brighton Racecourse, overlooking the sea.

It’s a big event, with 2000 participants and approximately 500 of these running.

The London to Brighton Ultra race starts just up from the banks of the Thames in Old Deer Park, Richmond.  I was in the early wave at around 7am, so after a bowl of muesli, a banana and trying to get a bagel down, a quick cab ride from a friend’s in Ealing and I was there.  I like to get to the start with plenty of time to allow final checks, and essentials: coffee & toilet break.

To be honest, I had no idea the scale of the event until the start, but even with all the various Covid restrictions in place, it was very well organised and registration took no time at all.

The weather was great; it was warm, with no rain predicted, and forecast to get warmer as the race went on, more of that later.  Just before 7, I headed off.

The Thames Towpath: ‘Slow Down’

It was a beautiful morning, the weather was warm, and I felt genuinely grateful for my health, to be alive, doing something I loved with like minded people.

The first section of the London to Brighton Ultra route follows the Thames, on it’s meandering journey past Twickenham, through Teddington, and on to Kingston, where it cuts South East to the first pit stop  at 12km.

I love the start of ultra races.  The anticipation, the planning, the nerves; they can all be put to one side, and I can just run.  I get a wonderful sense of release and freedom.  Of course, in all the excitement I also have to keep repeating those two key words to myself: ‘SLOW DOWN’

On this occasion, I kept to my 11 minute mile pace, and loved every one of the first 10km following along the banks of the Thames.

Over the North Downs & the joy of the m25

Aside from the aid stations, in my head, crossing the M25 was the first real milestone to tick off.

Before that, still feeling strong and keeping roughly to my target overall pace, the route passed through residential areas on a gradual climb to the second aid station 25km in.  With so far to go, and not wanting to hang around, I filled my 2x 500ml bottles on my front (1x tailwind & the other water), grabbed a couple of snacks and carried on.

In any race you have lulls and lows. My first came 30km in after running through Coulsdon across Farthing Common on the climb to the top of the North Downs.  It was a combination of factors.  I found myself running on my own, it was getting warmer, I started to feel some fatigue and my mind played on the enormity of how far there was to go.

Thank goodness for the ladies from Eastbourne!  I can’t remember their names, and I only ran with them for a few kms, but the banter was just the tonic I needed to snap me out of my lull and focus on the moment.

Coming off the North Downs, what a joy it was to see the M25 and head through the tunnel… Section 1 tick!

M25 behind me, M23 beside me… journeying to halfway

With the M25 behind me, the M23 to my right, I felt in more familiar territory and the euphoria of having completed my first section propelled me along.

At this point it was mid morning and getting warmer.  We hadn’t yet reached the Sussex Serengeti, but the landscape was more open, with little shade and both my bottles were empty when I reached the aid station at 40km.

The route then follows a number of small lanes for 16km, past the halfway point, to the main rest stop at Tulley’s Farm in Turners Hill.  Until this section I had broadly kept to my target pace, but I was definitely feeling the heat, and was slowing down.

I should point out that when I refer to my target pace, it is mostly there to remind me to slow down and preserve energy.  I did have an idea of time for the overall race, but frankly this was more a guide for my support team than a target time.  My view is: I’m not an elite runner, there is so much out of my control in a race and I just don’t need the added pressure of a target time.

I found those 16km hard.  It was getting hotter, and the heat seemed to radiate off the tarmac of the road.  It was also flat.  I find hills are my friends in long races… ‘Walk the Hills’ is the ultra mantra… when it’s flat there’s no respite.  I would add to that ‘Eat on the Up’.  My stomach was churning, and I was craving food… real food!

So it was with relief when I arrived at Tulley’s Farm, and was presented with a plate of spaghetti bolognese.

Heading for a date with Gary ‘The Legend’

Usually I don’t spend long at aid stations, I know it’s stupid… but my competitive side shrieks that this is a race and these are minutes lost.  On this occasion I made the right decision to stop to get a proper meal, grab my bag, change my shirt and shorts and sort out my bars for the remainder of the race.

I left 30minutes later rejuvenated and refreshed.  I was a little worried that the spag bol might come back to haunt me, but I’m fairly used to eating whilst running and on this occasion there were no side effects.

The route here cut across some beautiful Sussex countryside, through fields and woods to the impressive Ardingly school and next aid station at 67km.  Whilst it was still hot, with the shade and gentle hills it didn’t feel as oppressive, and though I wasn’t speeding along it was steady progress.

After the rest stop at Ardingly my next goal was to meet my friend Gary, who had kindly agreed to run the last 20km with me, in Wivelsfield.

Gary’s slowest ever Half Marathon

I’d been in contact with Gary en route to arrange a time for him to meet me at the 80km aid station.  Fortunately he was extremely patient when I rocked up 2 hours later than I had originally planned. It was wonderful to see him, and to know that he would get me over the last 20km.

What I don’t think he realised was just how slow it would be.  As we set off from Wivelsfield there’s a very slight incline… after 80kms you know an incline when you see one and Gary running off into the distance at a slow pace, kindly stopped and walked with me.

Even with Gary’s enthusiasm and encouragement the last 20kms were a struggle.  Everything ached, my stomach was on strike and even though I wanted to eat something, I would look blankly at the table of goodies at the pit stops.  But it was late afternoon, it was cooler, and the South Downs were no longer a distant sight; they were in touching distance!

After crossing Plumpton racecourse and passing through the last aid station, I was stumbling up the South Downs and onto familiar territory that I had run on countless times.  I could smell the finish line!

Beyond the Downs, there’s a lovely long descent to the Amex Stadium at which point I had 5km to go, or just a parkrun.  With Gary encouraging me all the way, regaling me with his tales, and getting little in return, I was heads down focused on getting it done.  I wanted it to be over… now.

‘There’s someone ahead of you, I think you can beat them’

There’s a cruel descent and final hill up to the top of the racecourse, at which point you run back on yourself to cross the main road before you get on to the race track.  Entering the race track was utter bliss… lush grass underfoot, the sun low in the sky, the finish line around the corner.  All I had to do was finish…

Gary pipes up: “There’s someone ahead of you, I think you can beat them.”  I pass the competitor with 4 furlongs to go, tears on my cheeks as I know I’ve done it.  I see my wife and kids at the finish line… so happy, so relieved and so exhausted! I’ve run 100km!!!

Interested in what was in my race kit? Read my article: What Kit do I Need for my First Ultra Marathon

Did you run London 2 Brighton? Have you run 100km before? How did you find it? Share your thoughts in the comments below!